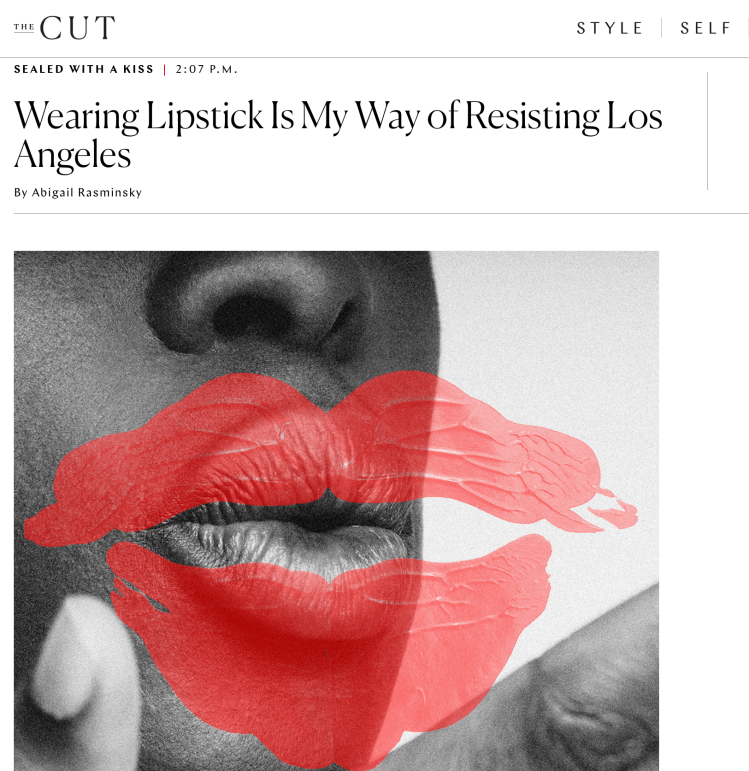 Here’s something no one tells you before you move to Los Angeles: you will no longer need clothing.

Let me rephrase: you will no longer need real clothing. When I moved to L.A. two years ago I was shocked to discover that grown women wore leggings everywhere — not just to and from yoga or the gym, or even just to walk their dogs, but IRL, as they say: to preschool drop off and pick-up; to the grocery store; to casual weekend gatherings; to coffee shops and restaurants. And I’m not talking about leggings with long blouses and knee-high leather boots. I’m talking about leggings as pants. With, like, a T-shirt and flip-flops.

I wrote about lipstick for a series in The Cut called “Sealed with a Kiss.” So delightful in these dark times! Read on here. 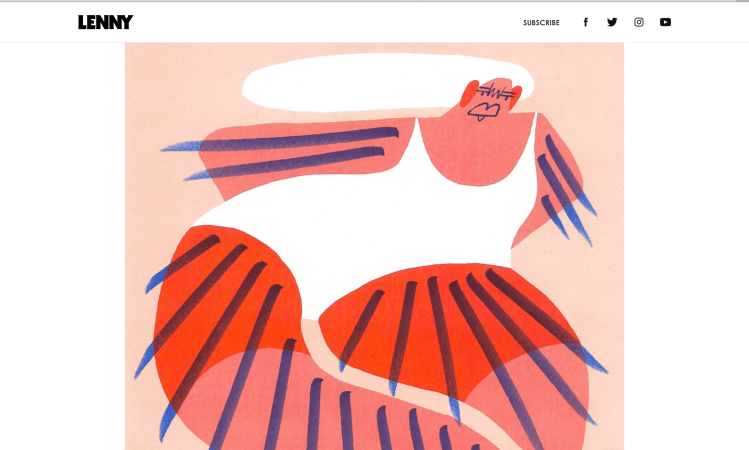 Happy Friday! I’m delighted to be in Lenny today, with the story of how I healed from chronic back pain. If you want to go back and read Part 1 of the story on Longreads — all about my dance career — click here.

I’d love to hear all about your woes of pain and (hopefully) recovery.

We converged on New York City from every corner of the globe: from college dance departments in Ohio and Michigan and Minnesota, and conservatories in Florida and California and North Carolina; from Athens and Stockholm and Tel Aviv, and tiny towns in Brazil and Ecuador and Italy, all of us sweeping into Manhattan, that sliver of an island, from the outer boroughs for morning class. In our bags: cut-off sweatpants and bottles of water, tape to bandage split and bleeding toes, matches to soften the tape, apples and bags of tamari almonds from the Park Slope Food Coop, sports bras and tubes of mascara, gum, cigarettes, wallets full of cash from late nights working in bars and restaurants, paperbacks and copies of New York Magazine, and iPods for long subway rides. The bags weighed 10, 15 pounds.

My piece about dance, injury, chronic pain and identity is up on Longreads! Click here to read on.

I wrote a piece  about life as an expat in Vienna. Luckily no one  who was offended has told me so! Yay!

(Life as an expat: Lots of dirty baby clothes. No dryer.)

When my husband and I moved to Vienna, Austria, two years ago, we were frequently set up on friend dates. This is par for the course for a new expat — someone hears that you’ve moved to some faraway city, and their coworker’s cat’s former owner’s cousin always knows someone who — can you believe it? — just happens to be your neighbor. No matter how outlandish the setup — they were born-again Christians or Hassidic Jews, they were hated by the very people who’d put us in touch — we always went.

After these meetings, I would invariably turn to my husband and say: We’d never be friends with these people in real life.

Real life: this was my phrase. Not in New York, where I had lived for 12 years, or the vague back home, but in real life, as though I had skipped a track and found myself in a different, parallel universe.

Read the rest on Medium!

Yesterday in German class we learned  about possessive articles in the nominative form and in the accusative form. (I honest to God had to look that up. This is how completely it went over my head.) This basically entails learning the difference between eure and euer (their, or their, one is masculin, one feminin); when to use ihr (her) and when to use sein (his) and when to use ein (a).

I’m a week and a half in, and class has  been fine so far. Here’s a typical scenario (in German):

LEHRERIN (teacher): Abby, can you read the sentence and fill in the correct answer?

LEHRERIN: How many rooms?

ABBY: Uhm, The room has three. No four. Four rooms!

I was progressing  at top speeds until yesterday. But then. Oh Lord. As we spent  the entire session going over the difference between ein and einen and when to use which I couldn’t help but feeling like I was back in 10th grade math,  struggling to understand the difference between sin and co-sin. My poor father, the scientist, spent hours  helping me understand the principles behind whatever we were learning that week. “Can’t you just give me the formula?” I’d ask. (There was always a formula! But my father wanted me to understand the damn logic.) He stared in disbelief,

I survived math class by reassuring myself that I’d never need it after high school. I was  an artist! When would I need to know how to solve for X?! In 11th grade, I even had the balls to say to a very  kind teacher who was working excruciatingly hard to help me understand something completely  incomprehensible, “When will I ever need this?”

“You won’t,” he said. And therein ended my math career.

I sometimes wish I could say the same here. But it is undeniable that  I need German. Still, I can see how much less I need it than other people in my group. Every day I sit next to  a young Iraqi dentist. He is 23 and was forced to leave Iraq due to “terrorism by tourists” (English is our common language, so not everything is always terribly clear). He  is sweet as can be. Between me and the Italian woman, who sits to his right, he has his hands full, explaining everything to us a second time. (As an aside, I love it when the Italian is asked to read aloud: “Die Tasche” always sounds like “Deee-AA Tas-chA.”)

But for all the energy I spend being pissed that he’s picking everything up faster than I am, there is no denying why: He needs it.  English saves me almost every time — it is very rare to find someone who cannot speak a word — and if English doesn’t work, my husband does. The Iraqi kid’s English isn’t bad (, but he cannot play with the language the way I can, making myself understood at all costs.  And much more importantly, he is starting his life and his career over. He cannot go back to Iraq, and is waiting for the rest of his family to take refuge here, too. I can picture him hunched over his notebooks at night, studying the crap out of “der tische” (the table) and “die lampe” (the lamp) because soon, if he wants to use his good, Iraqi education, he’ll have to learn all about the parts of the mouth, the instruments of dentistry, the Austrian rules of licensing, etc. etc. etc., in German, .

I just want to  order a coffee properly. 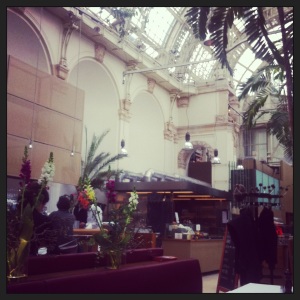 Obviously it reminds me of all those cab drivers one encounters in New York who were marine biologists and award-winning physicists in their homelands and then learned English just well enough to support their families by carting Manhattanites to LaGuardia. Necessity is, indeed, the mother of invention. My learning curve here is stilted because  English is my crutch, and I know that I will never hold down a job in German. I don’t have to. This is exactly the opposite of the experience I had in Paris learning how to sit and stand properly — getting it meant getting out of pain. Not getting it meant another day in agony. You can bet I learned the crap out everything I was taught — practicing at home, taking copious notes — just to save myself. But in Paris, I did look around at all the other  students thinking, I am desperate. Why the hell are you here?

I still ask myself this, as I sit in a tiny university classroom with five 20-year-old Turkish boys, two super blonde Polish girls and my Italian and Iraqi friends, learning how to say “the fork.” Why the hell am I here? The question is now both comical and no longer completely weird. And yet. Here I am, lucky and unlucky to be struggling to say “Where is the bathroom?” And yet there are rewards. The other night I went out with one of our loveliest new friends and her lovely girlfriends, and while I didn’t understand much of what any of them were saying when they spoke to one another at breakneck speeds, I was able to order for myself, ask the waiter to pack up my schnitzel, and find my way home on my own.

These days, this is a victory.