Many of you know that I have a fondness for pools. Today, my husband and I decided  to go for an early-morning swim. Arrive after noon or 1pm, and it’s impossible to  get across the pool.  For some mysterious reason, 99% of pools in Vienna are closed for most of September and October (probably in order to  give the lifeguards some time off). As a result, we’ve been forced to swim at a pool at the very edge of the city. It takes us a good 40 minutes to get there. For New Yorkers, this is nothing, so forgive me for the complaint. But this is Vienna, and there is literally a pool up the street. If only it weren’t  under construction until 2014. 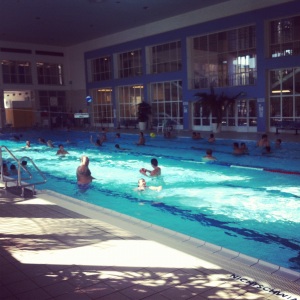 After we did our laps and were  stretching on the side, I noticed something sweet as can be: A group of 10 or so middle-aged women were learning to jump off the diving board.

Now, if I’m being generous, this diving board was about  two feet off the ground. We’re not talking about Greg Louganis here. The gaggle of ladies lined up like they were in nursery school, and one after the other, sort of…fell into the pool. They even had a special preparatory stance: Arms out to the side, legs scissored open. Most of them stood on the board, looked out at their shivering cohorts in horror — how I can I possibly do this? — opened their limbs, took a big breath in, sealed their mouths shut, and slid into the pool. Or crashed into it. One woman, who was wearing pants, a dress and a bathing cap, got onto the board, stood there for some time mulling it over, dismounted, watched a friend jump in, and then tried again. On the second go, she made it into the water.

They were so pleased with themselves! So proud, as they got in and out of the water, in and out, in and out.

It got me thinking about being bold — about taking physical risks. Of course I don’t know the first thing about these women, but I cannot imagine that there was some vital reason that they learn to jump off a diving board at age 40. But they were doing it anyway.

Because of my back injury, I’ve taken very few physical risks in the last few years. At first this was  frustrating. I loved trying the hardest yoga poses, the weirdest, most exhilarating partnering, leaping higher, faster, more boldly. The bruises on my elbows and scratched knees were proof. And then I just…couldn’t.

In the last few weeks, I’ve rolled out my yoga mat for the first time in over 5 years. And I’ve  taken some real risks. The practice  looks nothing like it used to when I could  balance on my hands, but I am spreading my limbs, and taking a big breath in (and out). There is no reason for this. Just the willingness to jump in again.

5 thoughts on “On Being Bold”