That first part is a lie. I’m not really German. But today I had my first full-on experience with German bureaucracy, and I lost something along the way: my religion.

It started here, in the Ubahn (or subway) station. I’ll pay any non-German-speaking person a whole lot to pronounce that word. I can’t even really tell you what it means. My interpretation:  Beware of German Bureaucracy.

Here it is, friends: a  typical Bavarian breakfast, white sausage and a pretzel. I decided that the best way to celebrate my  becoming a faux-German was to eat like a German. Let’s just say, David had a double serving, while I sulked about the fact that we hadn’t eaten the best donuts you will ever eat here. (Seriously. Back home, I am obsessed with Doughnut Plant, but this place is  out of this world.)

We went to register me with the city so that I could legally stay more than my free 90 days. When we got to the joint, I got a second chance to pronounce the longest word on earth (look closely: it’s in white). Instead, I got a picture of David  and a random bicycle-in-window. (On a side note: Have you ever been to Amsterdam? Never in my life have I been so convinced I was going to be killed by a  woman in clogs.) 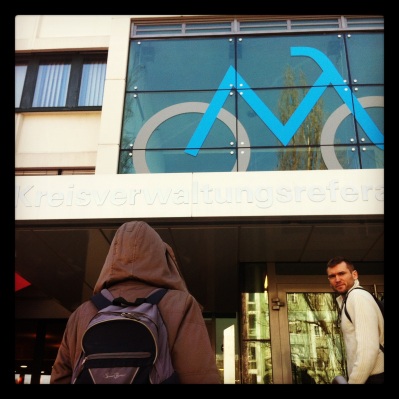 Inside, it was your standard fare DMV mishegoss — one window, one number; another room, another number; lots of people clutching tiny slips of paper and staring at 46……………….47. All was going swimmingly. Until. I had to fill out several forms, which basically means that David filled out a lot of forms because they were all in German. (Two months in, and my German is still  pathetic; more on this another day.) One of the forms asked for my religion. David wrote Jewish. When our number came up, we went into the little room with the bureaucrat — a 20-something-year-old woman in jeans; the radio was playing George Michael the whole time, even though it should have been blasting REM — and David did the talking. She smiled, took my forms and made some new forms.

My old form — filled out by David — said “Religion: Jewish.”

My new, computerized form — corrected by the bureaucrat — said “Religion: —.”

We didn’t say anything because we wanted to get me a Visa (which we did), but we left the office perplexed. As the day has gone on, we’ve both been feeling more and more uncomfortable about it. I’m not really sure what to say about this, other than the obvious, which is that if it were 1939, this “exemption” — or denial — would never have happened. But it is 2012 — how does it serve me to not “officially” be Jewish? Why can’t I be? What should I (or they) be afraid of? Why is this part of my identity being so blatantly — so casually — blotted out?