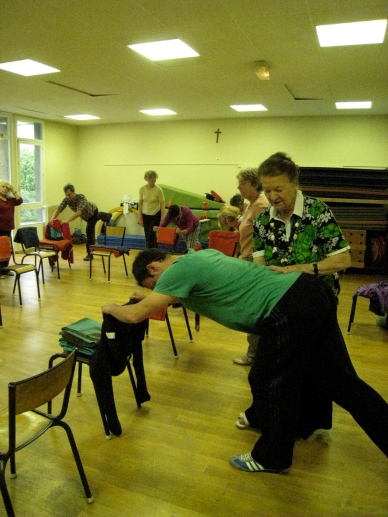 See the old lady pictured above, in the tacky, collared shirt, adjusting the guy in green in what looks like a Catholic (see cross) yoga class for old people (see all the grey hair)? My dear friends, I present to you: Noëlle Christiaens-Perez. On Monday, I am off to Paris to pay her a visit.

The story of Noëlle will emerge over the next few weeks and months here, but suffice it to say, she  is one of the people who miraculously cured me of four years of chronic back pain. As many of you know, at age 27, while working as a professional dancer and yoga teacher, I herniated two discs in my lumbar spine, which caused crazy amounts of sciatic (or nerve) pain down my leg, and made even the simplest things — carrying groceries, , sitting through movies — super challenging. For four years, I did everything I could think of to fix my body: physical therapy, acupuncture,  drugs, modified yoga, meditation, . Finally I broke down and had surgery, but it was ultimately deemed a failure. All in all, I took my clothes off for more healers than lovers, which was nothing short of depressing, considering I was a single, twenty-something New Yorker. I did, however, discover one perk of undressing in an office rather than in a bedroom: you were happy when the examiner told you what was wrong with your body.

(This is the part where I’d roll my eyes, but this is all true, so just hold on a sec.)

A wonderful friend who had also had a back injury derail her life in her twenties pulled B.K.S. Iyengar’s iconic book, Light on Yoga, off my bookshelf. She turned to p. 170. (Dear reader: Go ahead, open yours, I’ll wait.) I didn’t know that anyone other than B.K.S. Iyengar — in nothing but his skivvies and his thick unibrow — was pictured, but there was Noëlle, at age 30, in Paschimottanasana, seated forward bend. Her face is being crushed into her thighs, because Mr. Iyengar is balancing in a quasi-handstand on her back, his hands scooping around her ribs.

When I met her in 2009 in Paris, she was 84 and living in a tiny flat near the Eiffel Tower, running the Institut Superieur d’Aplomb. (Have I mentioned that she’s French?) The whole thing was beyond strange — for now, I’ll just say that she was eccentric — but I was desperate. The kind of desperate that only comes after years and years of wishing you lived in a different body.

But after two months of intensive postural work, Noëlle got me out of pain. How? We didn’t do a single yoga pose. Instead, she re-taught me how sit, stand, and walk, and I felt like I had been reborn. On Monday, I’m going back for a tune-up and to conduct some interviews with her for my thesis-slash-book on the subject.

One day soon I’ll tell you all about it, because don’t we all want to live without pain?